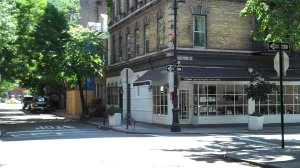 First night in New York, two and a half hours sleep, took red eye (now I really know what that means …red eyes). Met Rod Menzies for coffee and a tour to Tish NYU rehearsal space, on Broadway at 8th St. which he very kindly arranged for me through a friend.
Performed 5 minutes of the show, the Nun character – ‘Habits’ song, for a Fringe Preview and fund raiser for Generations Theatre Project. Gave away a free Stripes t-shirt to a man who answered a skill testing question…name three bad habits (his answer were doozies). My ACR (Acredited Company Rep) John Johnson was there to help promote and distribute postcards for the show.

Closest corner to Cherry Lane Theatre Greenwich Village…where I open Stripes: The Mystery Circus on Aug 20th, in The Studio.
Had my first rehearsal with my Stage Manager Jana, AJ. She is super organized and masterful…she is also directing a play in this Fringe Festival- Hip Hop High and just finished directing a film called Afirmative Action. She has taken my prop suitcase home tonight to make some repairs. We have a second rehearsal tomorrow then a preview performance at Bloomingdales Dept store in Soho.