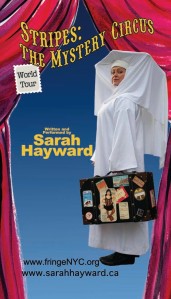 We were just given our Venues and times by FringeNYC. I’m very excited to be performing my show Stripes, in the Studio at Cherry Lane Theatre, 38 Commerce St. Greenwich Village.
The Cherry Lane has quite a history.
“A landmark in Greenwich Village’s cultural landscape, Cherry Lane Theatre serves as a lab for the development of new American works. As New York’s oldest, continuously running Off-Broadway theatre, the Cherry Lane has helped to define American drama, fostering theater that is fresh, daring, and relevant, for over 80 years.”
“In 1924, a group of artists, all colleagues of Edna St. Vincent Millay, commissioned famed scenic designer Cleon Throckmorton to convert the box factory into the theater called Cherry Lane Playhouse. It fueled some of the most courageous experiments in the chronicles of the American stage. The Downtown Theater movement, The Living Theatre, and Theatre of the Absurd all took root at the lively Playhouse, and it proved fertile ground for scores of the twenieth-century’s seminal theatrical voices.” (From The Cherry Lane Theatre Web site.)

It was the one theatre I tracked down while I was in NY in June and found it tucked away in the winding Streets of Greenwich Village.