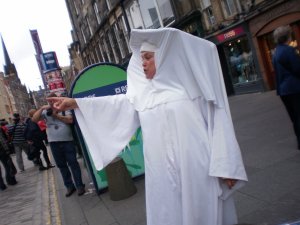 Today was the day to whip up my courage, with a little encouragement from Jo Bruno, a gutsy woman from NY, (with huge round black rimmed glasses) and Lynn Ruth Miller, (who reminds me of a cross between George Burns and Gypsy Rosalie’s grandmother). Lynn started stripping at 71 and is now 76 and in the fringe for the 5th year in a row, performing in three shows, I don`t think she really strips, but in the show I saw, she lifted her skirt to display a full bottom of pink tail feathers, worn on knickers over top of purple and black Stripped tights! She’s won awards for her stand up act, says of her humor, “she’s dirty“. Not in the show I saw about an organizer for a seniors residence, she sang and danced and flirted with the audience, we played scrabble and ate fruit and carrots.

Lynn Ruth thinks I am a stripper, when I introduced my self after the “How To Fringe” lecture, I gave her my business card, Stripes: The Mystery Circus, she thought it said STRIPS and so she invited me to be the opening act of her Cabaret Gone Wild night tonight in the 9:10 pm time slot. This was my one chance to perform here.

One of my goals here, other than finding out “How the Edinburgh Fringe Works” and seeing shows was to get on stage to do at least a portion of my show, somehow, and I did, a 10 minute version, opening for an 11 piece Rock Band with from the South of England who’s members ranged from 15- 20 years old. When I finished my numbers, Lynn Ruth, said to the audience “she`ll be back to do her show next year, maybe she`ll take off more of her clothes then,“ much to the horror of the 19 year old boys in the front row.

Earlier in the day I was kicked off the Royal Mile. Or rather told I must “stop performing“. It turns out that everyone who performs there, needs to pay the Fringe office 50 pounds to perform on the Royal Mile. I nearly got through my 8 minute “Nun – Two Headed Lady song” before I was stopped by official Fringe patrol, but not before I’d played to a crowd and had a big Scotsman in full kilted regalia come up and give me a pound and kiss me on the cheek when I was dressed as the Nun, all the while I was scolding him, for wearing stripes on his kilt. I felt greatly relived that I had screwed up the courage. It was too noisy to actually hear my music, (I really need an amplification system if I am planning to perform in a crowd, outdoors).

Spoke to an American actor who is paying $8,000 for his venue plus 40% of the box office to do his one man coming out story….and he may be lucky to get 10 people a night. Plus you pay the fringe society at least 300 pounds, to be in the official program, plus publicity…the costs to live here are high, expenses just go on, and on…aprox 2,000 to live cheaply for the month of performances. You need deep pockets or big sponsors to be part of this fringe…unless you do the free fringe, where you may not make much money but you don’t loose as much money as trying to book official venue! Plus you need a team of supporters to help with promotions and talking up the show.

Saw an excellent production at Traverse, this morning, “Little Gem”, monologues, three generations of the same family of Irish women…..fell in love with the characters, wept buckets. Fabulous script and gifted Irish actors.

Check out time 10:30, then off to see some more Fringe shows before flying to London tonight, staying near Gatwick airport then to Prague tomorrow morning for 6 days. 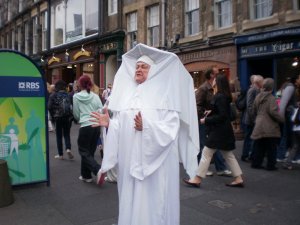 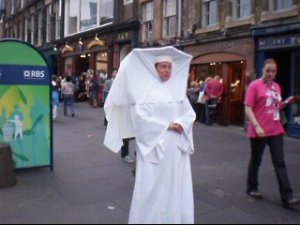